APS, delivered in May 2017, is designed by ARP, a young architecture practice based in Athens, Greece. The property is located on the south end of Antiparos, on a square plot situated along a mild hill, only 100 meters from the sea. The main orientation is south, facing the island of Despotiko, a protected archeological site. The prevailing wind comes from the north and northwest in the summer. Five square volumes, organized in two main levels, alternating with covered and open-air terraces and court- yards comprise the house. This chequered layout produces zones of covered, enclosed and open spaces and provides each space with its own light and air. On the lower level, the main house is made of three volumes, each hosting a specific program; the studio, the kitchen and the bedrooms. The studio is conceived as a generic space, an absolute square, with its three high doors in the south bringing inside most of the southern light. High openings on the backside allow northern light and air to come in as well. The kitchen is set further back creating a covered space in front and two courtyards in the back of studio and bedroom volumes respectively. The kitchen and covered terrace are conceived as the social spaces of the house around which people gather and offer a mild transition from the studio (public) to the bedrooms (private). The kitchen is long, with two large glass doors on each side that slide and disappear into the wall, creating a semi exterior space. On one side is a paved courtyard that extends the kitchen, and on the other side earth spills in, creating a direct connection with the landscape. The paved courtyard connects to an exterior corridor on the perimeter of the studio that leads out to the exit; this allows for ‘back of house’ access to the kitchen, storage and mechanical spaces. A stair cuts vertically through the house leading to the upper level of the summer guest quarters. The stair lands on the sun deck, from which you can access the sunken living area, overlooking southwest to the Despotiko and the sunset, or continue to the covered terrace between the guest houses. Each house hosts two guest rooms with a shared bathroom. 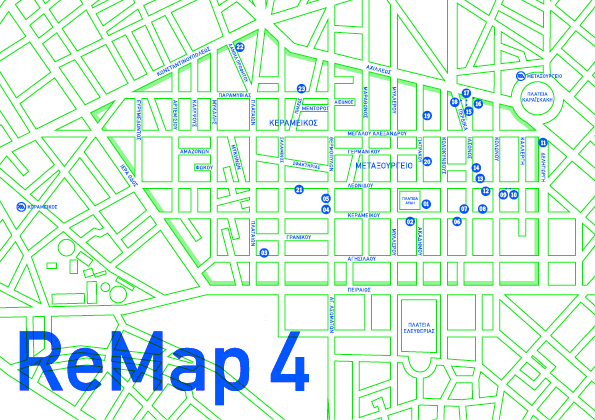